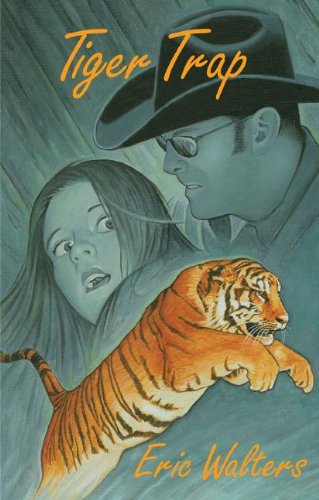 Tiger Trap
Eric Walters
Sarah and Nicholas Fraser, the irrepressible sister-and-brother duo of Eric Walters's bestselling Tiger by the Tail, Tiger in Trouble, and Tiger Town, are back for a fourth adventure. The kids are already swamped with exotic animals when Mr. McCurdy and Vladimir, the owners of Tiger Town, rescue another truckload of creatures, including two baby kangeroos, a leopard, and a lion. Always the worrier, Sarah frets about finances and wonders how they'll be able to care for the ever-expanding menagerie. Then a man named Anthony appears on the farm, and Sarah and Nick have a lot more to fear. Who is this newcomer — friend or foe, patron or poacher? All Sarah knows is that some shady characters are threatening her beloved animals again, a bunch of gun-toting crooks are trying to buy illegal wildlife for zoos, and some sort of parrot disease has put McCurdy's farm under quarantine!
1 Vote

Nicholas and Sarah Fraser volunteer at a park called Tiger Town. Tiger Town contains many exotic animals such as lions, tigers, kangaroos and leopards- all animals that poachers would love to get their dirty hands on. Because of this Sarah is very protective of the animals at Tiger Town. So when a man in crocodile skin boots appears and says he wants to help the farm, Sarah has her doubts. And when the park comes under quarantine from a seemingly fictitious disease, Sarah's uncertainty grows.