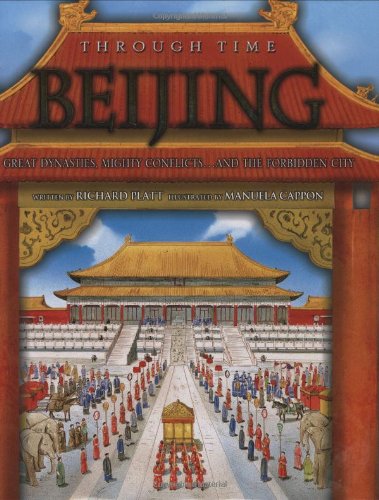 Through Time: Beijing
Richard Platt
Through Time: Beijing traces the rise and fall of great dynasties and the everyday lives of the citizens who prospered or suffered under their rule. Beginning in prehistoric times, an agricultural community slowly evolves. Farming villages then come under the control of a local lord, and by the medieval period an imperial palace is taking shape. This new capital is then overthrown by invading Mongols, who destroy it and build their own city. Later, the Mongols are replaced by the Ming, who create the legendary Forbidden City and rule China for the next five hundred years. The book's fluent narrative text and beautiful illustrations tell the enthralling story of BeijingÑits triumphs, conflicts, and people--right up to the present day.
1 Vote

A group gathers around the campfire. Their clothes are made from animal skins sewn with bone needles. They cook their latest catch - a deer. This is China in 16,000 BC. Fast forward 15,650 years, and there is now a thriving town. This town is called Ji, and sits at the future site of Beijing. In 1215 AD, Genghis Khan and the Mongols conquered China, and named the new capital Dadu. The Mongols were overthrown in 1368 by the Ming Dynasty. The Ming built the Forbidden City and built most of the Great Wall that we see today. Beijing ("Northern Capital") was born.