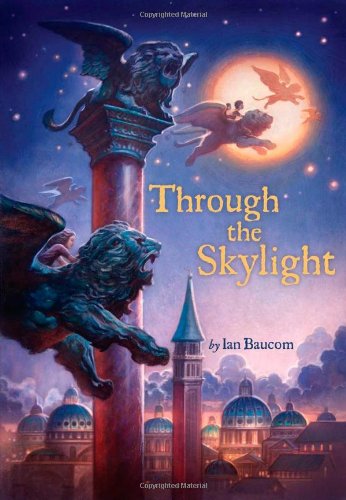 Through the Skylight
Justin Gerard, Ian Baucom
Two tantalizing tales, magically intertwined, cross cultures and span centuries as three kids set out to save the lives of three others—who just happen to live in the Middle Ages!A stone lion roars....A sleek black cat speaks....A faun leaps from the canvas of a painting.... When Jared, Shireen, and Miranda are each given one glittering gift from an old Venetian shopkeeper, they never fathom the powers they are now able to unleash; they never expect that their very reality is about to be utterly upended. And the adventure has hardly begun. For in another time, centuries earlier, another trio—Rashid, Maria, and Francesca—have been thrown together under terrible circumstances: They have been kidnapped and, along with hundreds of other children, will be sold into child slavery. Unless, that is, they can find some way to save them all. But all their fates lie in the hands of Jared, Shireen, and Miranda. The future—and the lives—of these three very modern children become entirely intertwined with those of the children from the past. Danger, it seems, has a way of spanning centuries.
1 Vote

This book is about three children visiting Italy while their dad works.  One day when it is raining and windy, they walk into a strange store they had never noticed before.  The owner was very kind to them and gave them each a chance to pick out of a bag of toys.  He also gave them a book.  The two girls got rings, but the boy only got dice.  At the same time, three children further back in the past are making their way to the rings and dice that really belonged to them.