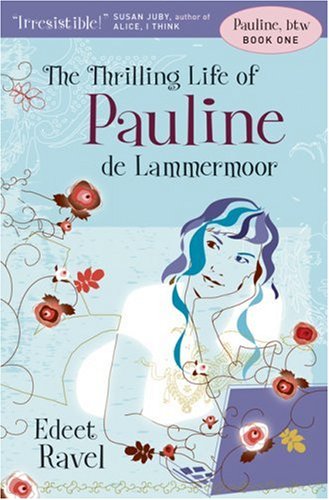 The Thrilling Life of Pauline de Lammermoor
Edeet Ravel
Nearly 14, Pauline has discovered that her life is far more interesting if she records it as a great work of fiction  featuring, of course, herself as the tragic heroine. Pauline’s hand-wringing accounts of misbehaving boyfriends, backstabbing friends, and general angst are intermingled with more serious issues like her parents’ divorce and her beloved teacher’s loss of a best friend to AIDS. Laced with the pop-culture references young readers love, Pauline’s novel” reveals the realities of today’s teenage life.
1 Vote

The Thrilling Life of Pauline de Lammermoor, by Edeet Ravel This book is the first in the series, Pauline, btw. It is written in a new format, as Pauline is recording her story as a novel, which she may want to try to publish. As school lets out for the summer after 6th grade, Pauline decides to devote her summer to writing her novel. She has lots to say, about her friends, family, and a certain boy named Yoshi. Her parents had divorced, and her mother has started dating again, while her father is busy painting pictures of old shoes.