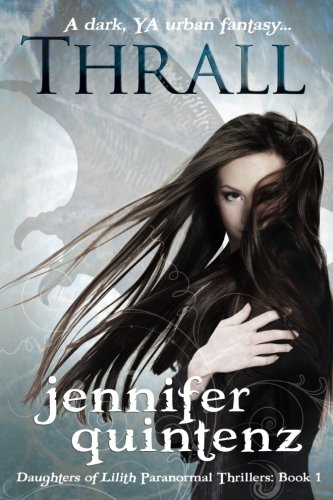 Thrall: A Daughters Of Lilith Novel (Vol 1)
Jennifer Quintenz
Braedyn is a normal girl just trying to survive high school with her two devoted friends, Royal and Cassie. Together they're doing a pretty good job of shrugging off the slings and arrows cast their way by the popular crowd when a new boy, Lucas, moves into the house next door. Suddenly Braedyn finds herself falling in love for the first time.But as her sixteenth birthday approaches, Braedyn discovers humankind is at war with the Lilitu, an ancient race of enticing demons that prey on human souls. Her father is a member of the Guard fighting against the Lilitu - and so are the new neighbors, including her crush, Lucas. As her world starts to unravel at the seams, Braedyn learns the right answers aren't always clear or easy. And as for "good" and "evil" - it all depends on how we choose to act.Inspired by the ancient Mesopotamian myths of Lilith and her offspring, Thrall explores first love, strong friendships, and taking on adult responsibilities against the backdrop of powerful supernatural forces and life-and-death stakes.About The AuthorJennifer Quintenz is a film and television writer, author, and graphic novelist. She has written for Twentieth Television, Intrepid Pictures, and Archaia Studios Press. She currently lives in California with her husband and son.
1 Vote

The book Thrall the Daughters of Lilith by Jennifer Quintenz is an action packed book with romance, too. This book is about a girl named Braedyn who finds out she is half lilithu (a demon-usually a female that feeds off of men). She was raised by a guard (demon hunter) named Murphy who is known for being one of the best guards. The Guards knew they would eventually need a lilithu on their side, so that's where Braedyn comes in to play. Many of the other guards think she will follow her lilithu sisters and join their side, so many do not trust her or many would like to kill her.