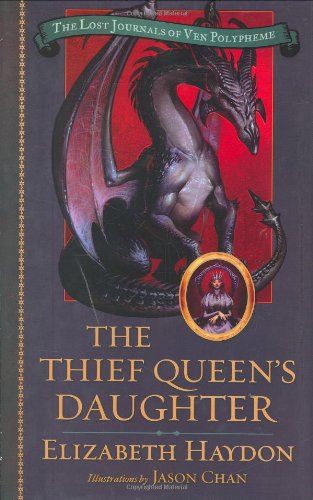 The Thief Queen's Daughter
Elizabeth Haydon
Long ago, in the Second Age of history, a young Nain explorer by the name of Ven Polypheme traveled much of the known and unknown world, recording his adventures. Recently discovered by archaeologists, a few fragments of his original journals are reproduced in this book. Great care has been taken to reconstruct the parts of the journal that did not survive, so that a whole story can be told… On his first day on the job as Royal Reporter of the land of Serendair, King Vandemere sends young Charles Magnus Ven Polypheme--known as Ven--on a secret mission within the walls of the Gated City. His quest? To discover the origin of a mysterious artifact given to the king's father. The king warns Ven to take care--because once you enter the Gated City, you might never be allowed to leave.  Within its walls, all sorts of exotic merchandise not found anywhere else in the world can be bought or sold. But not only merchandise. Dreams, wishes, memories…even childhood…can be sold--or stolen. The Gated City is ruled by the powerful Raven's Guild, and the guild is ruled by the Queen of Thieves.  Ven and his friends enter the Gated City ready for adventure. But when one friend is kidnapped and it is revealed that they are traveling in the company of the runaway daughter of the Queen of Thieves herself, their adventure turns deadly. For the ruthless Thief Queen will stop at nothing to get her daughter back….
2 Votes

The Thief Queen's Daughter continues the adventures of Ven Polypheme, a Nain who is traveling in foreign lands by himself, having all sorts of adventures. In this volume, Ven is sent by the King himself to visit the Gated City. The Gated City is where all sorts of criminals live, and it is ruled by the Queen Of Thieves. Ven and his friends enter for market day, planning to leave when the market closes-- when one of their members is kidnapped, and they are forced to remain behind and try to rescue her.

What's this?
The Thief Queen's Daughter review by AShap

This book describes the journeys of the explorer Ven. Set in a parallel world this book includes many different creatures including Ven, who is a Nain. Ven is entrusted with a mission by the king, who wants to discover the origins of a box given to his father. Inside the box is a stone which appears to be made of light. Engraved upon the stone is the seal of The Gated City where the descendants of ancient thieves are forced to live.