The Thief and the Beanstalk 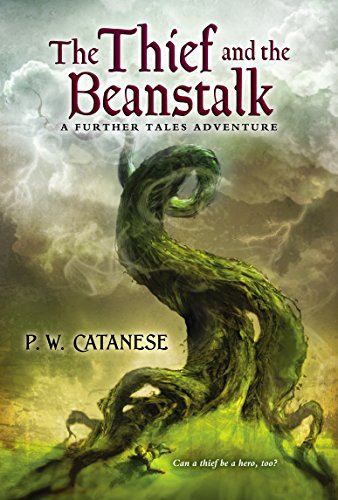 The Thief and the Beanstalk
P. W. Catanese
Everyone knows the story of Jack and the beanstalk. Everyone also knows that Jack's little adventure made him a very rich man. But what they don't know is what happened a long time after Jack.... That's where Nick comes in. Orphaned and desperate, Nick joins a rugged band of thieves in hopes of a warm meal and a little protection. In exchange Nick must help them break into the lavish white castle rumored to belong to an old man named Jack. Legend says it's full of riches from Jack's quest up a magical beanstalk decades ago. When Nick's dangerous mission leads him straight to Jack, he sees a chance to climb the famed beanstalk himself. But what Nick doesn't know is that things are different from when Jack made his climb. There are new foes at the top now. Ones with cruel weapons and foul plans -- plans that could destroy the world as Nick knows it. Will Nick come down the beanstalk a hero? Will he come down at all?
1 Vote

Tweet
The Thief and the Beanstalk review by MY

Nick is a boy who was abandoned at a young age. He has realized that the only way to survive is to steal. He even joins up with a bunch of older thieves. One of his first missions is to go inside an old man's house named Jack, the one who climbed up the beanstalk. Once Nick gets inside he gets intrigued by the story and takes some magical beans from Jack and plants them. Soon a beanstalk grows. As Nick climbs up he realizes this isn't just for the treasures, but for saving the world from two huge Ogres.