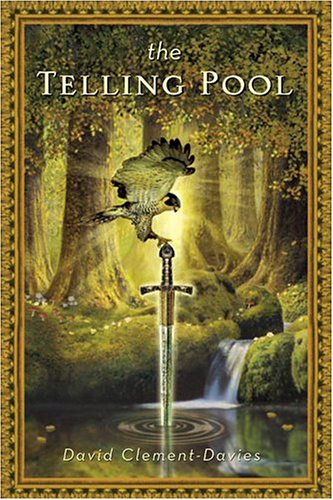 The Telling Pool
David Clement-Davies
A thrilling new fantasy from the author of the cult favorites Fire Bringer and The Sight.From the author known for his popular, "intricately crafted" novels, as praised by The Boston Globe, comes a new tale set against the backdrop of Richard the Lionheart's Crusade to Jerusalem. The Telling Pool's richly atmospheric tale draws on Authurian legend and pagan belief, following the fate of young Rhodri Falcon and his crusader father as they become entangled in the war of a king and the machinations of a seductive sorceress who literally steals men's hearts. Its up to Rhodri to defeat the sorceress and save his father before all is forever lost. As Rhodri discovers the evils of war fought in the name of religion with enemies who will stop at nothing to defeat him, he must dig deep within to discover the hero who will save his father and lead himself toward the man he will become. Expertly told, The Telling Pool transports young readers to the days of the Crusades, magic sorcery and the land where legends were formed. In the best-selling tradition of his previous books, Clement-Davies introduces readers a new character, Rhodri Falcon, who will forge ahead, determined to find good and in a land of evil.
2 Votes

Rhodri Falcon has lived his 11 years in happiness with his mother and father, a master falconer. But as unrest in the lands sends his father, Owen, to fight in the wars, Rhodri has to take up the responsiblities of the man of the house, much to his disappointment. Over the next few years, Rhodri is haunted by a fourtune he heard at a fair and one day, he ventures into the forest against his parents wishes, where he comes upon a blind hermit named Tantallon.

What's this?
The Telling Pool review by KMeng

Rhodri Falcon gets lost at the village fair and meets a blind blacksmith. The blacksmith tells him of the Telling Pool, which is a magic spring that a few chosen people can see the past, present, and future. Rhodri's father has to go fight in the Crusades and Rhodri doesn't want to stay in the village. He wants to be a hero. He learns information in the pool and when his father comes back he is a bitter person. Rhodri has to use the knowledge he learned to save his dad. He must also find the one sword that will save his country.