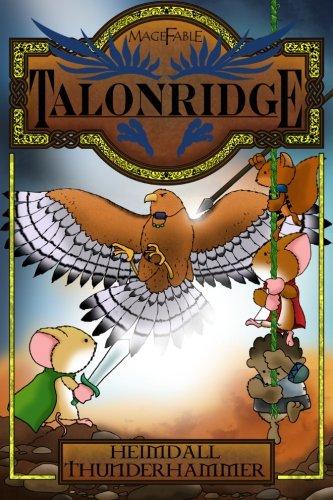 Talonridge
Heimdall Thunderhammer
Durbin the young mouse saved the forest of Verdancia from a horde of savage rodents. Then he helped Clove find the hidden Elemental's temple where she received the second spell in her quest to become a geomancer. But in the process, the group lost their trusted guide and ally. Durbin must now take the lead, knowing only that their next destination is the vast fields of Korel where the legendary rabbits who protect the critters of the land will help them find the third hidden temple. But when they arrive in Korel it is not the rabbits who are there to greet them, but a giant hawk intent on killing the five forest critters. The group is rescued by a clan of hedge hogs who tell them of the curse that has befallen Korel, where the hawks have defeated the rabbits and enslaved every critter of the land. Together they devise a plan to free the enslaved critters and defeat the hawks. But before them lies a mighty task, as they must climb to the palace at the peak of the giant mountain Talonridge. And many questions remain; Where is the hidden temple that contains the third spell? What secrets do the hawks of Talonridge protect? And what has happened to the brave rabbits who once ruled the land? Talonridge is the second book of the Magefable Saga which follows Durbin and Clove as they journey around the world to gain the powers of a geomancer—a mage with the ability to control the elements. On their journey they must survive terrible tyrants, ferocious predators, and the harsh elements of nature.
1 Vote

Talonridge is the second book in the Magefable series.   This book continues the adventures of Clove the mouse and her companions.  Their mission is to find the third temple of the elementals needed for Clove to become a geomancer.  Once she becomes a geomancer, she hopes to prevent Sinvicious from taking over their world.  Clove and her friends had been told by their trusted ally, Herod, to go to Talonridge, and the rabbits of Korel would help them.  But when they get there, they find that all of the rabbits are either dead or slaves.  Who had killed and