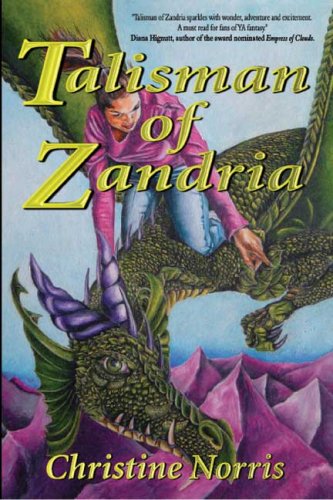 Talisman of Zandria
Christine Norris
When Ivy Peterson sees the most extraordinary thing in her own backyard - a fairy - she dismisses it as another daydream, but she quickly realizes that it was, in fact, the real thing. She goes in search of the mythical creature, and accidentally falls into Zandria, a magical world that exists just outside her own. Unfortunately, she finds that she's trapped there. Someone has stolen the Talisman, a magical amulet that controls the five gates between Zandria and her own world. Ivy and her new friends, the wizard Arden, his young apprentice Connor, and a pair of fairies, set off on a quest to reclaim the Talisman of Zandria.
1 Vote

The very first time Ivy Peterson disobeys her parents by going into the woods alone to search for what she thinks is a fairy, her life turns upside down. She is chased by bullies into the unknown part of the forest and gets lost. When Ivy wakes up from tripping, rolling down a hill, and hitting her head (which causes her to faint), she doesn't know where she is. Ivy was in a whole other world named Zandria. Then this boy named Connor comes along and says he will help her find her way home, but when he asks where she lives he finds out she lives in the Otherside.