A Sword in Her Hand 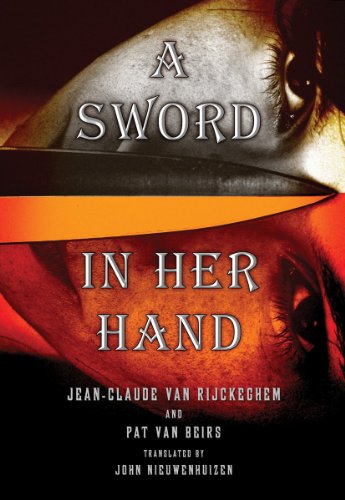 A Sword in Her Hand
John Nieuwenhuizen, Pat Beirs, Jean Rijckeghem
A feast of a medieval adventure with a thoroughly modern heroine. As the murmur of prayers fills the icy room, mother and baby seem doomed. When the newborn finally struggles into the world, the Count of Flanders flees in a rage. The child is not the expected male heir -- but a girl. Growing up under the disapproving eye of her heartless father, the strong-willed Marguerite instinctively learns to survive in the fierce and violent male world of the Middle Ages, with its pagan rituals and bloody fights to the death. When her father demands that she wed a man she detests, the young countess uses all her cunning to stop the marriage. The only thing she cannot conquer is the plague, which marches across the land killing thousands, including the man she loves. Based on a real character, this colorful story is told with sharp humor and is filled with dramatic intensity. The final scene in the book, in which Marguerite and her father engage in a savage sword fight, will remain engrained in readers' memories. "Winner of six major European awards, this is a brilliantly written book, with a feisty narrator and sharp sense of humour -- the medieval world was seldom more alive." -- girl.com.au "Dramatic in . . . a masterly way. Power and temperament give the tale conviction, far away from mere medieval setting and brave historical obligingness." -- Die Zeit
1 Vote

Tweet
A Sword in Her Hand review by KHolt

On what is supposed to be a spring night (but instead cursed with a overly long winter) the Countess of Barbant is giving birth to the future Count. To everyone's horror, the baby is turned sideways in the womb. The baby survives, but an even more horrifying discovery is made - the baby is not to be a future Count, but a future Countess - it is a girl. Lady Marguerite grows up with a rough childhood, after many miscarriages her mother goes crazy, and her father despises her for not being the male heir. When she is old enough, she is forced upon marrying Edward, whom she despises.