A Stone In My Hand 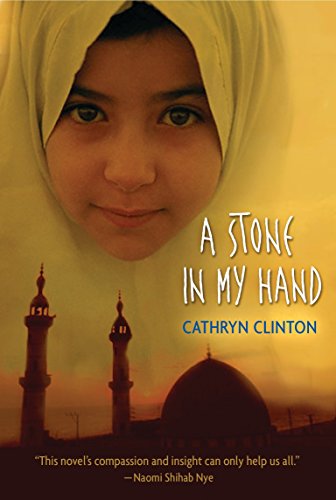 A Stone In My Hand
Cathryn Clinton
FOUR STARRED REVIEWS! Now available in trade-paperback is the haunting story of a sensitive, observant girl who finds her voice in 1988 Gaza City. (Age 11 and up)The year is 1988 in Gaza City, and it has been a month since eleven-year-old Malaak’s father left to seek work in Israel, only to disappear. Every day Malaak climbs to the roof and waits, speaking little to anyone, preferring the company of the little bird she has tamed. But her twelve-year-old brother, Hamid, has a different way of coping. He feels only anger, stoked by extremists who say violence is the only way to change their fate. Malaak’s mother begs him to stay away from harm, but Malaak lives in fear of losing her brother as well. What will it take for her to find her voice—and the strength to move past the violence that surrounds her?
1 Vote

Tweet
A Stone In My Hand review by APB

After her father's disappearance, young Malaak is perched on the roof of her dingy home in Gaza, waiting for him to come home. Little does she know, however, that has been the target of terrorist bombings, and will never return again. As the days go by, her beloved brother Hamid is getting involved in a very violent terrorist Palestinian group that is threatening Israeli soldiers and threatening his life. More and more casualties are suffered, and all that Malaak seems to be able to hold on to is her pigeon, Abdo, and Hamid's poems. Can she save her brother and all of Palestine?