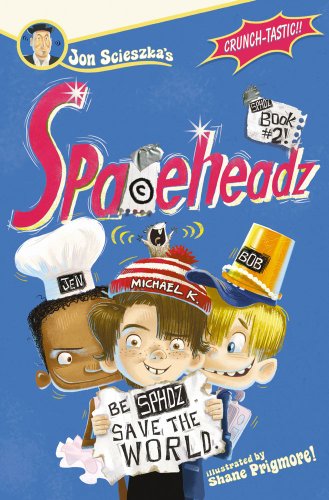 Spaceheadz (Be SPHDZ Save The World)
Jon Scieszka, Shane Prigmore
The campaign is going well. The SPHDZ word is getting out. 1000's of kids have signed up to say they are SPHDZ. But things haven't gotten any easier for Michael K. The SPHDZ are still trying to blend in to our Earth culture, but not very successfully. They're still mixing up Thanksgiving, cartoon plots, holidays, and commercials. This makes it especially hard for Michael K. to both hide the SPHDZ from Agent Umber and accomplish the SPHDZ Mission. He's forced to enlist the help of fellow fifth graders, Venus and TJ. When they (Michael K. and the SPHDZ) are given the assignment to write and perform the school play, Umber thinks he's closing in on the aliens...the kindergartners playing the turkeys.
1 Vote

Tweet
Spaceheadz (Be SPHDZ Save The World) review by Pikachu

This book is about two kids and one hamster from a different planet. Jennifer and Bob, the two aliens, team up with Micheal K. to save the world! To save the world they have to get 1 million people to be SPHDZ but Agent Umber is always trying to mess them up. They have many exciting adventures including everything from space guns to giant donuts. This is the second book in the series.