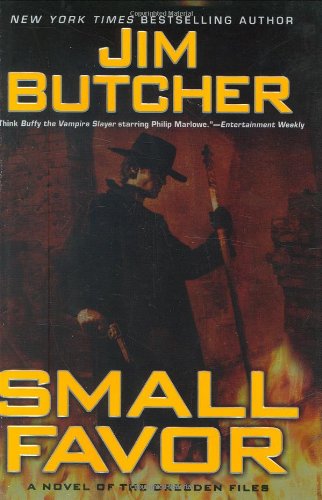 Small Favor
Jim Butcher
THE New York Times BestsellerHarry Dresden?s life finally seems to be calming down?until a shadow from the past returns. Mab, monarch of the Sidhe Winter Court, calls in an old favor from Harry?one small favor that will trap him between a nightmarish foe and an equally deadly ally, and that will strain his skills?and loyalties?to their very limits.
1 Vote

Small Favor by Jim Butcher is set in modern-day Chicago. The main character is Harry Dresden, a member of the White Council of Wizards. His life starts to go downhill right at the start, when he is attacked by Gruffs sent by the Queen of Summer. He then goes on to serve Mab, Queen of Winter, in rescuing a crime lord who had been captured. With the help of his brother Thomas, his friends Michael, a Knight of the Cross, and Murphy, a Chicago police officer, and his apprentice, Molly, they track down the man's location to save him.