Skin Hunger (A Resurrection of Magic) 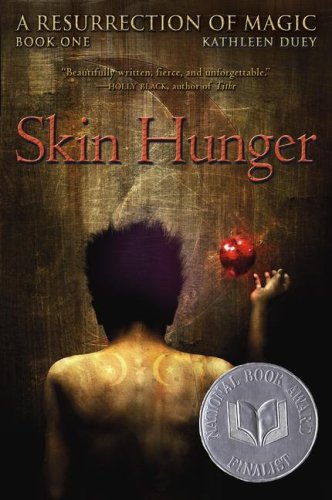 Skin Hunger (A Resurrection of Magic)
Sheila Rayyan, Kathleen Duey
Living in a world where magic is outlawed, Sadima's special gift to speak to the animals binds her to two young men who are determined to restore magic to their poor village in order to save the people they love.
1 Vote

Tweet
Skin Hunger (A Resurrection of Magic) review by AStad

Skin Hunger is a book with two stories taking place generations apart. One story is about Sadima, a magician whose mother died the day she was born, and the "magician" helping her give birth robbed her family. The other is about Hahp, who is the son of a rich merchant who sent him to a wizard school, knowing he may well die. Sadima is approached at age 14 by a wizard named Franklin, asking her to join him and Somiss, his master, in the port city of Limori, where they are working to restore magic to a world where it is despised and feared, and there are many fraud magicians.