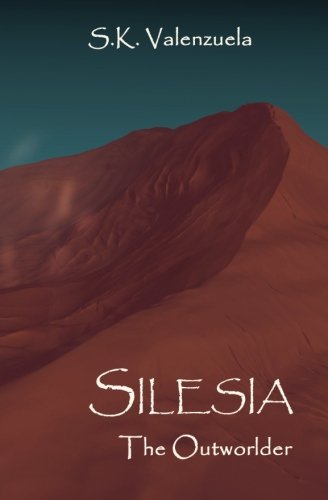 Silesia: The Outworlder
S.K. Valenzuela
An assassin haunted by her past. A desert world with no hope of a future. An evil collective bent on their total annihilation. Imagine a retelling of the legend of St. George and the Dragon that blurs the boundaries between science fiction, fantasy, and myth in the vein of C.S. Lewis's classic Perelandra Trilogy and delves into the nature of evil and redemption like The Chronicles of Riddick. That's THE OUTWORLDER, the first volume of the Silesia Trilogy.For virtuoso assassin Sahara Acwellan, this flight was supposed to be her last. Convicted of slaying the Dragon-Lord Chieftain on her homeworld and sentenced to the labor camps on the desert world of Silesia, Sahara's brilliant career as a freedom fighter has been cut short. But when fate intervenes and her prison transport crashes in the sands, she might have a second chance to finish what she started.All that stands in her way is Jared Alareth, the warrior turned apprentice healer with a past as shattered as her own. He rescues her from the desert and brings her to his home city of Albadir, but Sahara's plans have nothing to do with moving on and everything to do with vengeance. As Sahara sweeps Jared and his people into a conflict they have tried so desperately to avoid, they discover that the treachery of the Dragon-Lords goes deeper than they could ever have imagined. And when Sahara's fate becomes twined with that of everything Jared loves, will he find the courage to save her and his people before it's too late?THE OUTWORLDER is an explosive, poignant science-fiction adventure that questions whether true love really can conquer all, and whether you can ever really find freedom when the strongest chains that bind you are the ones within your own soul.
1 Vote

Everything changes in Silesia when Sahara’s prison ship crash lands, leaving her as its only survivor. She is found and saved by Jared, who brings her to his city. Having a tragic past, Sahara has a difficult time becoming part of life in Albadir, connecting only with Jared, whose past is equally torn. Together they share a connection that neither of them understands, but is the only thing that allows them to survive as they battle against the power-hungry Dragon Lords bent on their destruction.