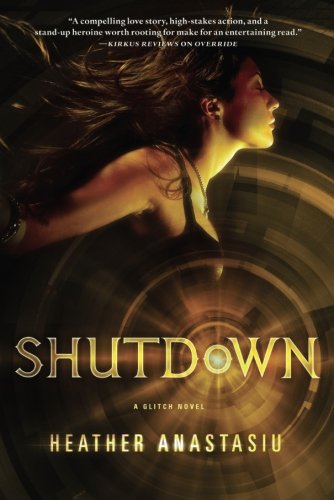 Shutdown
Heather Anastasiu
The battle is all but over, and all hope seems to be lost. Zoe and her fellow Resistance fighters are on the run, having lost their home, their protection, and their leader. They are outnumbered and outmatched by the powerful corporation that controls the world, and the cruel Chancellor is inches away from completing a scheme that would kill most of humanity. Zoe's only remaining option is to chase the impossible dream of upending the Link system, freeing the world from the hardware that controls their thoughts and emotions, and hope it will trigger a revolution. The plot requires a nearly impossible mission to infiltrate the dangerous Community, and it is a task that Zoe must unfortunately complete alone. After horrific torture at the hands of the Chancellor, Adrien remains unresponsive, an empty shell of the boy Zoe loves. With challenges and surprises at every turn, nothing goes according to plan. Adrien's visions of the future now show two possible outcomes: one in which they succeed, and one in which humanity falls. It all lies in Zoe's hands. Full of high-adrenaline action and shocking twists, Shutdown is a heart-pounding conclusion to an exciting sci-fi adventure trilogy for young adults. The thrilling conclusion to Heather Anastasiu's action-packed sci-fi Glitch trilogy
1 Vote

​Zoe was a Glitch in the perfect, orderly, apathetic new world of the Community, but after being rescued by Adrien and the Resistance, or as they call it, the Rez, she finally felt as though she belonged somewhere. Her feeling of safety is destroyed as their fight with the Community comes to an end and their home is overtaken. As a last resort Zoe attempts to destroy the humanity-enslaving mind Link by doing the most dangerous thing of all-- returning to the Community.