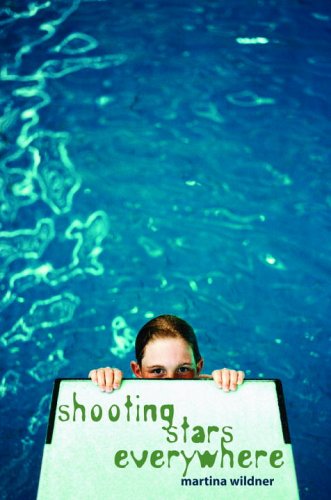 Shooting Stars Everywhere
Martina Wildner
The first anonymous letter arrives on July 23rd, Victor’s 13th birthday. Which is good, because it gives him something to write about in the journal his father gave him as a present. Soon Victor is writing down everything that happens as he tries to solve the mystery of the letters, conquer his fear of jumping off the high diving board at the pool, and figure out what is going on between his divorced parents. Things change when he meets D, however. A good diver and an assertive detective, she helps Victor to stop writing his life and start living it.
1 Vote

Victor receives a journal from his dad on his thirteenth birthday (although he'd rather have gotten a skateboard). He also received a mysterious letter in the mail, which he then writes about in his new journal. He writes about everything that happens to him in his journal, including the mystery letters he keeps getting. Then one day while at the pool, Victor meets a girl named D, whom he becomes friends with. She helps him overcome his fear of jumping off the diving board.