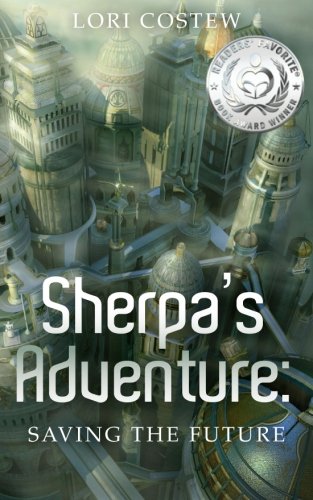 Sherpa's Adventure: Saving the Future
Lori Costew
2013 Silver Medal Award Winner with Readers Favorite! The year is 2310. It's been a strange Sweet Sixteen for Sherpa. First Lillian, her mother and Ruler of the Western World, was able to slip a surprise birthday party past her. Then Lillian revealed a secret government laboratory Sherpa's never even heard of, one that is working on a time travel gadget she has also never heard of. Now to top it off, she is given this gadget called a Reality Tracking Device (RTD) for use in travelling back and forth in time. Why? Well, the secrets are only just beginning to reveal themselves...and the next one is a doozy. Turns out that rather than being appointed Chancellor of Positivity, Sherpa's greatest dream, she is instead tasked with saving the earth's future from General Aveel, the evil dictator bent on destroying the world peace. Saving the world is not easy, so she practices by traveling on "hops" to help famous people such as Amelia Earhart, Gustave Eiffel, and Neil Armstrong- when they were kids- avoid making mistakes which would change the course of history. Sherpa gradually uncovers the RTD's power... and finds herself growing up in the process. When a hop lands her in the year 2013, she joins forces with Emma and Jose and the adventures really begin. Journeying down the Road of Life, barely escaping from transfiguring Hubots, and saving Pineville Middle School from negativity and bullying gives them the practice they need to stop General Aveel's heinous plot before it's too late--and hopefully before the inventor of the RTD, the brilliant -and gorgeous- Dr. Troy Lichtenstein has a girlfriend! A highly entertaining and thrilling look at a potential future for humankind, Lori Costew's debut is a hilarious and insightful adventure filled with thought provoking insight, one that shows how damaging bullying and negativity are and how they keep us all from realizing our true potential. Today's kids are tomorrow's leaders; they are highly connected and have an idealistic spirit. Sherpa's Adventure: Saving the Future demonstrates the importance of being part of something bigger than yourself. Come ride the wave with Sherpa! Reviews: "This is a thrilling, insightful, and hilarious look into the future. Every page draws you more and more into Sherpa's adventure and the world of 2310. A book for all adventure lovers and space travelers of the future."--Lara Robinson, actress, The Knowing "...delightfully well-written novel. The dialogue is appealing, the plotline flows nicely to the story's conclusion, and readers of all ages will appreciate the message that good decisions make for good lives."--Rated 5 Stars: Readers Favorite
1 Vote

Sherpa wants to be the Chancellor of Positivity, but has to travel through time in order to find out what that truly means!  Ultimately she learns the true gift she has to offer the future and keep it safe. She has to go into the past and touch people's lives so that they have the same positive outlook.  Life's lessons are universal and timeless.