Shen and the Treasure Fleet 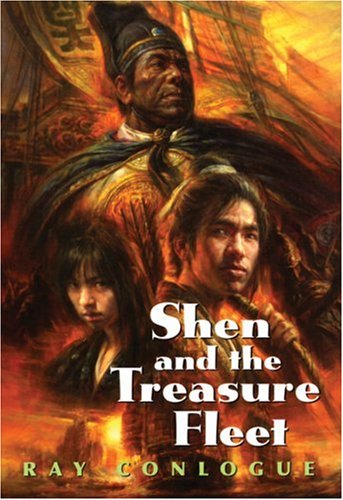 Shen and the Treasure Fleet
Ray Conlogue
To save his family, one boy will defy the power of two armies in 15th-century China. Shen and his sister Chang are on the run. It's 1403, and the city of Nanjing is under siege. Their mother has been imprisoned, and their father, an Imperial Bodyguard, is presumed dead. Hoping to avoid detection for their connection to the former regime, Shen and Chang take refuge in a traveling acrobat troupe. Meanwhile, the new emperor has commanded the construction of an armada to explore the world the -- treasure fleet. But a violent struggle breaks out between Zheng He, the powerful leader of the fleet, and the government officials who fear him. Fleeing the growing conflict, the acrobats gain passage with the fleet. Shen soon discovers they'll be sharing their vessel with the notorious Yang Rong, a government official with the power to free their mother. Shen and Chang enter a dangerous game of double-dealing. After months at sea they manage to defy the power of both armies, and they eventually save their parents. But they also discover that their own lives have been changed forever. The China they knew no longer exists. For Shen especially, it is too late to go home. Set in a period of unparalleled Chinese exploration and rich with historical detail, Shen and the Treasure Fleet is an adventure of majestic proportions.
1 Vote

Tweet
Shen and the Treasure Fleet review by PFlo

I enjoyed Shen and the Treasure Fleet by Ray Conlogue. For a long time, I have been fascinated by the Zheng He, the 15- century Chinese explorer who is major character of this book. His experience as an explorer was equal to those of some European explorers such as Christopher Columbus and Magellan. Unfortunately, I am not sure how historical accurate the book is. A reader has to read the introduction of the book for it to make sense. The book is little confusing before you get used to it.