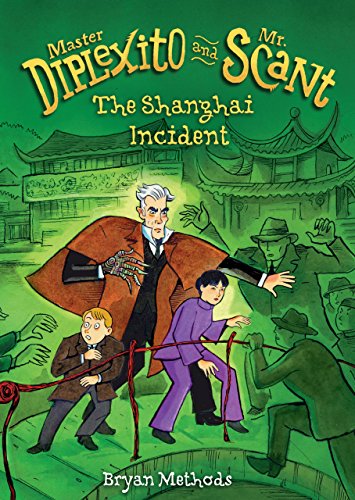 The Shanghai Incident (Master Diplexito and Mr. Scant)
Bryan Methods
The pursuit of an international crime syndicate sends British vigilante butler Mr. Scant and his protégé Oliver Diplexito on a globe-hopping trip. After defeating a sinister secret society in Oliver's home country of England, the unlikely pair has arrived in Paris, searching for Mr. Scant's missing niece. What they discover are hints of a conspiracy that leads them all the way to Shanghai, China. Each clue they find only leads to more questions. That is, until Mr. Scant, Oliver, and their allies realize they're the only hope of stopping a plot against China's child emperor.
1 Vote

Master Diplexito and Mr. Scant: The Shanghai Incident by Bryan Methods is set mostly in Shanghai, China. Mr. Scant’s brother, Uncle Reggie, believes his daughter, Miss Gaunt, has gone missing. Master Diplexito and Mr. Scant go to Shanghai to find her, while Uncle Reggie recovers from a bullet wound. While in Shanghai, Diplexito and Scant get caught up in an evil plot by the Star and Stone Association to start a civil war in China. Their adventure finally leads them to find Miss Gaunt, and together they try to foil the plot to start a civil war.