Samantha Hansen Has Rocks In Her head 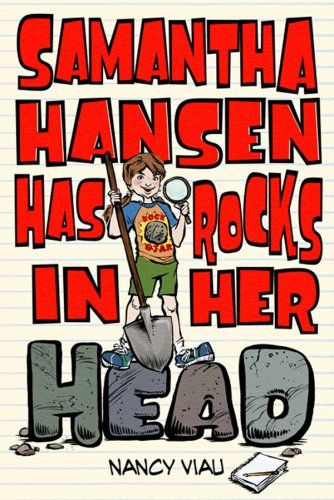 Samantha Hansen Has Rocks In Her head
Nancy Viau
Ten-year-old Samantha Hansen is a mad scientist. But not the crazy kindshe doesn’t blow stuff up or mix potions or dissect bugs. She just loves scienceespecially rocksand figuring out how the world around her works. But there are some things there just isn’t a scientific answer for. Like, why can’t her bossy big sister keep her hands off Sam’s rock collection? And why can’t Sam control her temper? There are some bigger questions, too, like why did her father have to die? And why won’t her mom talk about him anymore? When Sam’s mom announces a family trip to the Grand Canyon, it’s a dream come true. But it’s also a challenge: If Sam can’t learn to calm down and ignore her irritating sister, she’s going to miss her chance to see one of the world’s biggest rocks and maybe find the answers to some of her questions.Samantha Hansen Has Rocks in Her Head is a hilarious and touching debut that introduces an exuberant new character who studies the world around her as she discovers what is in her own heart. F&P level: S
1 Vote

Tweet
Samantha Hansen Has Rocks In Her head review by TKono

"Samantha Hansen Has Rocks In Her Head" by Nancy Viau is a fun chapter book for young readers. It recounts the scientifically passionate life of little Samantha, a tomboy in the fourth grade. She goes on a class trip to a cave, performs at a talent show, sees the Grand Canyon, and develops her first crush. In general, she is in love with rocks and earth science. Aside from the main plot events, there are also parts where Sam needs anger management, learns to get along with her sister, discovers facts about her late father.