Ruby Redfort Look Into My Eyes 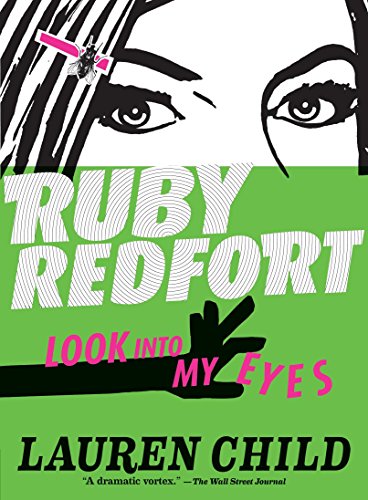 "Sardonic narration will grab readers from the get-go, and puzzles laced throughout will intrigue those who share Ruby’s passion for solving mysteries." — Publishers Weekly (starred review)Everyone knows that Clarice Bean is exceptionordinarily keen on the Ruby Redfort books. Now in her own starring role, Ruby, a genius code-cracker and daring detective, along with her sidekick butler, Hitch, work for a secret crime-busting organization called Spectrum. Ruby gets into lots of scrapes with evil villains, but she’s always ice-cool in a crisis. Just take a classic screwball comedy, add heaps of breathtaking action, and multiply it by Lauren Child’s writing genius, and what have you got? Only the most exciting new middle-grade series since, like, ever.
2 Votes

Tweet
Ruby Redfort Look Into My Eyes review by TaurielOfMirkwood

13 year-old Ruby Redfort is amazing at code-cracking. But she is surprised when she receives some weird messages, phone calls, and clues. They turn out to be from a super secret organization, called Spectrum, who needs Ruby to help them solve some clues that a late worker left behind while trying to figure out a case. Mystery and danger soon follow....and soon Ruby finds herself in a bad position.

What's this?
Ruby Redfort Look Into My Eyes review by underwood_bcl

Ruby Redfort is an expert at breaking codes.  At seven years old she won the Junior Code-Cracker Championships by cracking a code in only seventeen days.   When she entered the Junior Code-Creator Championship her code was sent to the university where it took professors two weeks to solve it.  This book takes place when Ruby is several years older.  She is even better at writing and cracking codes.  Consuela Cruz, the Redfort’s new dietary expert, has an argument with Mrs.