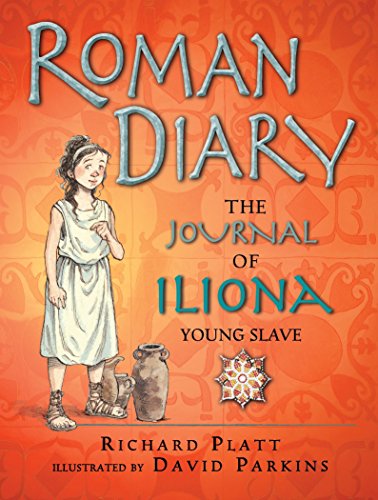 Roman Diary
Richard Platt
Relive the drama of the Roman Empire through the eyes of a young Greek slave in this latest installment in an acclaimed historical series.Iliona never imagined that her sea voyage from Greece to Egypt would lead her to Rome. But when her ship is boarded by pirates, that’s where she ends up — as a slave. Separated from her brother, Apollo, Iliona is soon at the whim of her owners, and the chance of regaining freedom seems like a distant dream. But unlike her brother’s plight, Iliona’s life as a slave isn’t as bad as she feared: her new family provides clothing, food, and even schooling, and best of all, she is free to explore the wonders of Rome. Step back to AD 107 and take in the luxury of the baths, the splendor of the Senate, the thrill of gladiatorial combat, and the excesses of Roman feasts in a fictional diary full of excitement, humor, and accurate historical detail.Back matter includes notes for the reader, a glossary, an index, and sources.
1 Vote

Roman Diary is a story about a Greek girl named Iliona. A warehouse that Iliona's father owned burned to the ground so her father must travel immediately to see it rebuilt. This causes her father to decide that the family shall move to Alexandria. While traveling to Egypt with her parents and little brother, Apollo, their ship is attacked. Iliona and Apollo are soon orphaned and become slaves. While being bought and sold they end up in Rome where they are separated from each other. Iliona struggles with the changes of her life, when she meets her master and mistress.