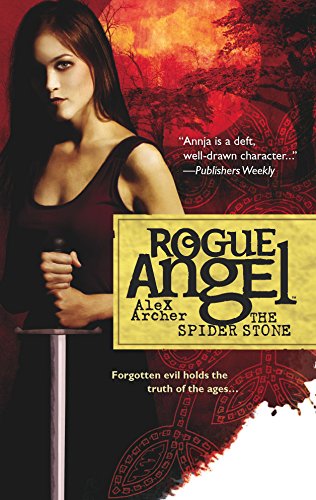 Rogue Angel: The Spider Stone
Alex Archer
In the crumbling remains of a tunnel that was part of the Underground Railroad, a mysterious artifact reveals one of the darkest secrets of Africa's ancient past. Intrigued by the strange, encrypted stone, archaeologist Annja Creed opens a door to a world—and a legend—bound by a fierce and terrible force. She is not alone in her pursuit of the impossible. A bloodthirsty African warlord, and an international corporate magnate exploiting a land, a culture and a people, are equally anxious to stake their claim on the relic's unknown power. Annja's odyssey deep into the primeval jungles of Senegal becomes a desperate race to stop those eager to unleash the virulence of the Spider God.
1 Vote

Another Rogue Angel book, The Spider Stone has a lot of the same elements as Destiny. Annja Creed, an archaeologist, is called in about the discovery of several skeletons of slaves in Kirktown, Georgia. The identity of one of the slaves, Yohance, leads Annja, Professor Hallinger, and McIntosh to West Africa. In possession of the Spider Stone, they become the target of Tafari, an African Warlord after the treasure of the Spider god, Anansi. Roux and Garin, characters from Destiny, also play roles throughout the book.