Rise of the Golden Cobra 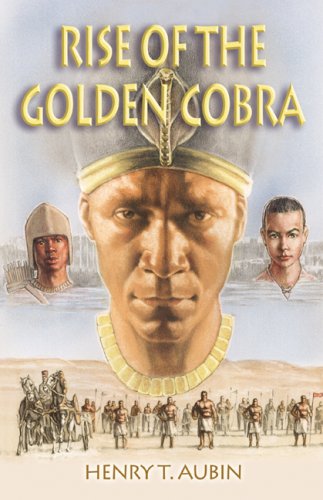 Rise of the Golden Cobra
Henry Aubin, Stephen Taylor
A young scribe with revenge on his mind. A pharaoh's war for the honor of Egypt. An action-packed tale from ancient history. During a picnic overlooking the Nile, 14-year-old scribe Nebi spots the riders first. Led by the treacherous Count Nimlot, the raiding party slaughters Nebi's master, the region's head of police. Although wounded, Nebi -- knowing that the pharaoh's northern territory is no longer secure -- escapes as the only living witness. Nebi is quickly catapulted into events that will change history. Set in 728 B.C., Rise of the Golden Cobra surrounds the actual reign of Pharaoh Piankhy, the brilliant and compassionate leader whose astonishing campaign united ancient Egypt. Nebi's adventures take him to the court of Piankhy himself, to friendship with feisty Prince Shebitku, and to war. Fierce battles culminate in the siege of Memphis, where Nebi finally confronts Nimlot and his own desire for revenge. Well-served by the pharaoh's honorable example, Nebi finds release in letting Nimlot live. Meanwhile, Piankhy's victory unites North and South Egypt, making him the one true pharaoh entitled to wear the golden cobra crown. Bursting with action and political intrigue, and rich in historical detail and dramatic illustrations, Rise of the Golden Cobra is an epic adventure for the ages.
1 Vote

Tweet
Rise of the Golden Cobra review by KFlo

This coming of age story follows the adventures of Nebi, an Egyptian boy. He is in the employment of Setka, an important official of the King Piankhy. When Setka is ambushed by a traitorous count, Nebi is the only witness alive. Nebi braves the desert to reveal the count's actions, and to deliver an important message. Nebi gets caught up in King Piankhy's battle to reunite Egypt against foreign invaders. He meets many influential people, such as the king himself, and gets many good friends, as Nebi struggles to be reunited with his family, and get revenge for Setka.