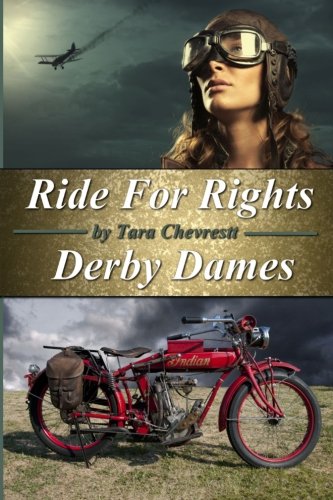 Ride for Rights
Tara Chevrestt
In the summer of 1916 women do not have the right to vote, let alone be motorcycle dispatch riders. Two sisters, Angeline and Adelaide Hanson are determined to prove to the world that not only are women capable of riding motorbikes, but they can ride motorbikes across the United States. Alone. From a dance hall in Chicago to a jail cell in Dodge City, love and trouble both follow Angeline and Adelaide on the dirt roads across the United States. The sisters shout their triumph from Pike’s Peak only to end up lost in the Salt Lake desert. Will they make it to their goal of Los Angeles or will too many mishaps prevent them from reaching their destination and thus, hinder their desire to prove that women can do it? Thirteen years later, Angeline is determined to have one last hurrah before motherhood. She signs up for the Women's Air Derby, with no clue just how interesting the competition will be...and no idea if her husband will be waiting on the other side of the finish line. For Penelope Burns, the derby is a chance to "stick it" to her patronizing husband and win her son’s pride and affection back—she hopes. Veronica Truman just wants to make her ailing mother proud. Nancy Devine, Hollywood starlet and diva, wants to be the next Lady Lindy of the Air...and will pay any price. One week, a group of very determined and capable women pilots, sabotage, and fate come together. Who will fly to success? Who will "crash and burn"? And what awaits them in Cleveland, Ohio?
3 Votes

In the summer of 1916, two sisters, named Angeline and Adelaide Hanson, desperately want to prove that women are capable of doing things. To do this, they figure that the best way is to ride motorbikes from New York to Los Angeles. Since women do not ride motorbikes, or travel across the U.S in them, what better way to prove women can do things just like men? Unfortunately, several mishaps follow them and make their destination seem unreachable. Will being put in a jail cell or getting lost in the Salt Lake dessert stop them? Read the book and find out!

What's this?
Ride for Rights review by JO1011_Hopkins

In the early 1900's, a woman does not have the right to vote. She stays at home, cooks and cleans, and only has the value of entertaining her husband. A woman is no more than a pretty face early in history. So what will the men think of the first women motorcycle dispatch riders? To prove to America that women can do it, sisters Angeline and Adelaide Hanson attempt to ride their motorbikes coast-to-coast across the United States. But their ride for rights becomes more challenging than expected when they are arrested, assaulted, abducted, and end up lost in the desert.

What's this?
Ride for Rights review by Sammie987

In this story we follow two sisters, Angeline and Adelaide Hanson, in their journey across the United States. The setting is the summer of 1916 when women are still treated as if they could not do the same things as men. The two sisters were determined to show that women are just as capable as men. Their chance came up when someone said that they should have women as motorcycle dispatch riders for the war. They jumped at the chance to prove themselves.