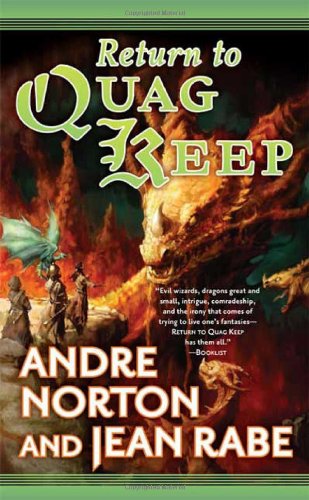 Return to Quag Keep
Jean Rabe, Andre Norton
Many people might not know that Andre Norton wrote the first novel based in the Dungeons and Dragons Universe. That book was Quag Keep. Now Andre with role-playing icon Jean Rabe has returned to tell a new tale of those magically transported gamers in the fantasy realm that has become all too real for them.In The Return to Quag Keep these brave adventurers try to unlock the secrets of this magical world and maybe even return home to ours. Filled with classic dungeon crawls, mysterious wizards, and attacking dragons The Return to Quag Keep is a must for all role-playing fans as well as seminal Andre Norton fans.
1 Vote

A group of adventurers, who have been whisked away from Earth to a magical land much like the one they play Dungeons and Dragons in, are forced to protect a caravan to pay off their debt that they made when they accidently started a bar fight. On their way to one of the towns, one of the scouts, Ingrge, captures a man who was following them. The man tells them he was sent here to, and why they were whisked away here after they touched the figurines. He also tells them that the only way to get back to Earth and to save Earth is to save a wizard locked in Quag keep.