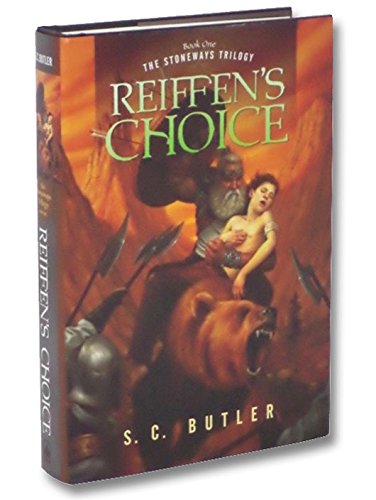 Reiffen's Choice
S. C. Butler
Reiffen, only twelve years old, is the true heir to the thrones of both Wayland and Banking. He and his friends Avender and Ferris live in a magical world of talking animals, dwarves, and shape-shifting bears but…he lives with the shame of knowing that no one will ever let him rule these kingdoms, that their crowns will bring him nothing but betrayal and sorrow…and that he is powerless. Reiffen will have only a short life of child's innocence, a brief respite from the trial of impossible adult responsibility, the trial of attempting to finish a task he can never complete.And then he is shown the nations of his world from the peak of a fortress drear and tempted with fame and fortune and his rightful place on the throne of great kingdoms--his kingdoms. He need only surrender his humanity; kill his loves and he would have his childhood fantasy.He would be granted great Black knowledge, more furious than anything he had ever imagined. He could desire justice…but would have to kill everything he loved to get it. His prayers would be answered…if only he would sacrifice everything he held dear.Reiffen's Choice is the first book in a trilogy about innocence and struggle that can only be compared to Eragon and Eldest, The Once and Future King and Raymond E. Feist's Magician. It will be an experience you will never forget.
1 Vote

A young boy named Reiffen who is the heir to the thrones of two kingdoms is kidnapped by a group of wizards known as The Three. Reiffen's friends in his hometowm of Valing come together and plot a way to rescue the boy from Ussene, a place where no one has ever escaped. During his stay in the dungeons of Ussene, Reiffen discovers the intentions of the three. The wizards wish to teach him magic and use him as a pawn to rule the kingdoms.