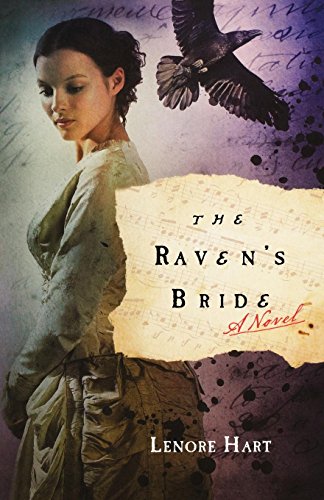 The Raven's Bride
Lenore Hart
When eight-year-old Virginia "Sissy" Clemm meets her handsome cousin, Eddy, she sees the perfect husband she's conjured up in childhood games. Thirteen years her elder, he's soft-spoken, brooding, and handsome. Eddy fails his way through West Point and the army yet each time he returns to Baltimore, their friendship grows. As Sissy trains for a musical career, her childhood crush turns to love. When she's thirteen, Eddy proposes. But as their happy life darkens, Sissy endures Poe's abrupt disappearances, self-destructive moods, and alcoholic binges. When she falls ill, his greatest fear– that he'll lose the woman he loves– drives him both madness, and to his greatest literary achievement. Part ghost story, part love story, this provocative novel explores the mysterious, shocking relationship between Edgar Allan Poe and young Sissy Clemm, his cousin, muse and great love. Lenore Hart, author of Becky, imagines the beating heart of the woman who inspired American literature's most demonized literary figure– and who ultimately destroyed him.
1 Vote

Virginia, or Sissy, Clemm isn't a name that most people will recognize, but her husband, Edgar Allen Poe, is probably one of the most acclaimed authors. Like most famous authors, Edgar Allen Poe was neither rich nor famous throughout his life. The Raven's Bride by Lenore Hart is a fictional account of Virginia and Edgar's unlikely romance and the hardships they went through, both before and after their marriage.