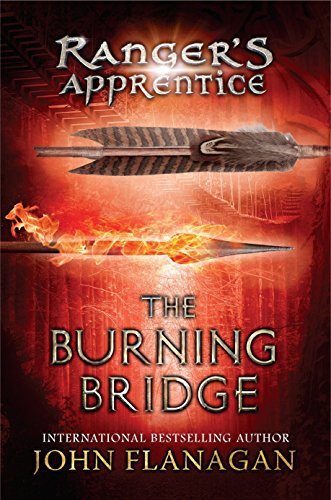 Ranger's Apprentice: The Burning Bridge
John Flanagan
The international bestselling series with over 5 million copies sold in the U.S. alone!Bracing for a final clash with the evil warlord Morgarath, the Rangers rally the kingdom’s allies, and Will is chosen, along with his friend Horace, as special envoys to nearby Celtica. But the simple mission soon takes an unsettling turn – the Celticans have disappeared, their town abandoned. The scheming hand of Morgarath, it seems, has been far from idle. He has found a way to bring his legions over the once impassible eastern mountains and is planning to ambush the king’s army in a rout. Now with help many miles away, Will and Horace are the only ones standing in the way of the dark lord’s plans.They have shown great skill and courage in their training, but how will they fare in the face of true evil?Perfect for fans of J.R.R. Tolkien’s Lord of the Rings, T.H. White’s The Sword in the Stone, Christopher Paolini’s Eragon series, and George R. R. Martin’s Game of Thrones/A Song of Ice and Fire series.Watch a QuickTime trailer for this book.
1 Vote

In the book Ranger's Apprentice Book Two: The Burning Bridge the main character, Will, is an apprentice to a legendary ranger named Halt. Will is sent on a mission to the King Swyddned of the Celts to ask for men in the battle against Morgarath the evil Lord of Rain and Night. Will is accompanied by another ranger, Gilan, who was a former apprentice to Halt and not too much older than Will. He is also accompanied by a trainee to the battleschool, Horace, who is around Will's age and an old friend.