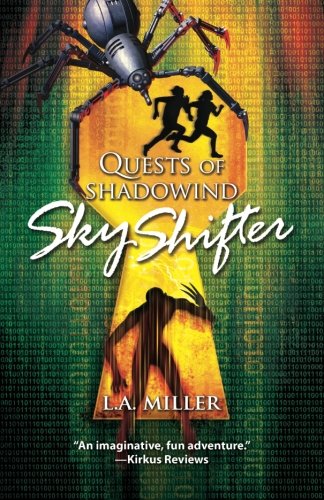 Quests of Shadowind: Sky Shifter
LA Miller
Abducted...to an Alien World! Logan and Mindy Oakes wake up to discover everything has changed. Wrong beds, wrong clothes, wrong house. And, worst of all, their parents are missing. When they go outside, they run into a friend whose parents are also gone. In fact, all the grownups in town have inexplicably vanished. Then along comes a spider a giant, monstrous, mechanical horror. And that s the least of the nightmares that will befall the brother and sister in Shadowind, a dangerous, otherworldly dimension inhabited by ghostly creatures, cyborg animals and virtual humans a land where anything is possible, including being downloaded into a cryptic, evil role-playing game. In order to survive, Logan and Mindy band together with other kids determined to find a way back to the life they knew and loved. Ultimately they must battle the sinister cyber-lord for the Staff of the Sky Shifter, a powerful weapon that could destroy the universe...but might also be the key to getting back home.
2 Votes

One day, these people were in a strange place. They wanted to find their parents, but they were not in the strange place. Logan went into a computer, and they saw a blue team and a red team in war. Logan was on the red team. If Logan beat the blue team he would get farther into the computer. The farther he got, the better chances he would find his parents. Logan and his gang went exploring in the woods. They saw something strange. Logan went back into the computer. He saw a door that said, "Breeze," but he had no idea what it meant. They had no idea what was going on.

What's this?
Quests of Shadowind: Sky Shifter review by jotaf

Quests of Shadowind: Sky Shifter is a book about two kids (Logan and Mindy Oakes) who are mysteriously teleported to a world that isn't their own. It's inhabited by robot animals, ghostly silhouettes, and computers that allow you to enter into the computer world. For some reason all of the kids in their neighborhood have teleported with them. Their quest is to get back home.  While on their quest, Logan and Mindy find that all the parents have been taken far away. To find them they must gather some mysterious artifacts.