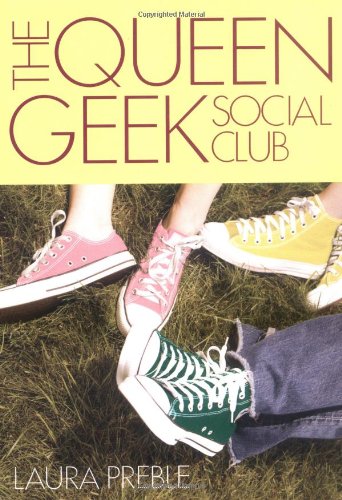 The Queen Geek Social Club
Laura Preble
If you're somebody like Shelby Chappelle, a smart, witty, pretty geek army of one, you can't just put a poster up at school and advertise for somebody to be your best friend. But now freakishly tall Becca Gallagher has moved to town, with her dragon tattoo and wild ideas. Suddenly Shelby's madscientist father and their robot, Euphoria, seem normal. They become best friends instantly. But Becca wants to shake things up at school and look for "others of our kind"...and decides to form the Queen Geek Social Club.The thing is, this guy Fletcher Berkowitz keeps nosing around, asking lots of questions about the Club. He's cute, and interesting, and possibly likes Shelby. Therefore, she must torture him. One good thing about being a loner: no one can break your heart.
1 Vote

Shelby Chapelle, a dork, is one of a kind. Until Becca Gallagher comes into the picture. Together, Shelby and Becca create a club, The Queen Geek Social Club, to unite others of their kind. As more and more girls join, they begin a campaign to feed the models (to help girls realize that they don't have to be skinny to be pretty) and create National Boy Invisible Day (to show that girls can have fun without guys). Shelby has her doubts throughout the campaign, and it is made worse by the fact that a jock, Fletcher Berkowitz, seems to have taken an interest in her and the club.