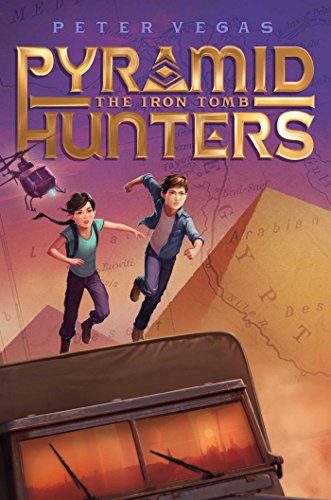 Pyramid Hunters: The Iron Tomb
Peter Vegas
Join Sam Force on a fast-paced adventure through Egypt that’s part National Treasure and part Indiana Jones with the start to a brand-new series packed with puzzles and clues for readers to figure out along the way!When Sam Force goes to Egypt to spend the summer with his uncle Jasper, he’s ready for the usual vacation filled with museums and lessons about the pharaohs and ancient gods. Instead, Sam arrives at the airport and learns that his uncle is missing and wanted by the police. After narrowly escaping his own arrest, Sam sets off to find his uncle using the series of clues that Jasper left behind. But a group of mysterious men are hot on his trail, and Sam knows they’re willing to do whatever it takes to track down Jasper and whatever Jasper was looking for. Now all Sam has to do is find it first. With the help of his new friends Hadi and Mary, and by using the knowledge of ancient Egyptian history and culture that he once hated, Sam makes his way across Egypt determined to find his uncle. And if he does, if he finds Jasper before it’s too late, he may also uncover the secret of the Iron Tomb…a secret that could change Sam’s life forever.
1 Vote

During the school year Sam goes to a boarding school in the United States, but every summer Sam goes to Egypt to spend the time with his uncle.  His uncle wants to teach Sam all about Egypt but Sam is not interested in learning.  In fact, Sam does not even want to come to Egypt in the first place. This particular summer Sam meets a girl named Mary on the plane.  Usually he tries to avoid conversation but this time Sam’s new found friend starts the conversation, and she does seem to know a lot about Egypt.