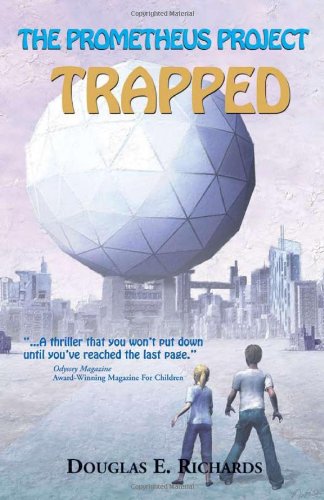 The Prometheus Project: Trapped
Douglas E. Richards
Ryan and Regan Resnick have just moved to the world's most boring place. But when they discover their parents are part of an ultra-secret project called Prometheus they are plunged into a nonstop adventure: one that will be the ultimate test of their wit, courage, and determination.Soon they are under attack and facing hostile alien worlds, alien technology, and unimaginable dangers at every turn. Now, with their mother facing certain death, they must race to solve a seemingly impossible mystery to have any hope of saving her. But if they save their mom, they will have no way to save themselves. . .
1 Vote

Ryan and Regan Resnick's parents have just been relocated for their job to rural Pennsylvania. One day, they overhear their parents talking about a secret project called Prometheus. They decide to stake out their parents' workplace and end up breaking and entering. This leads them to solve puzzles of every shape and size. They soon discover that puzzles aren't the only thing they have to solve. When they get into Prometheus, they discover an unknown alien environment. Inside a dwelling are their parents, who are now top-secret scientists.