The Prize: Tales from a Revolution 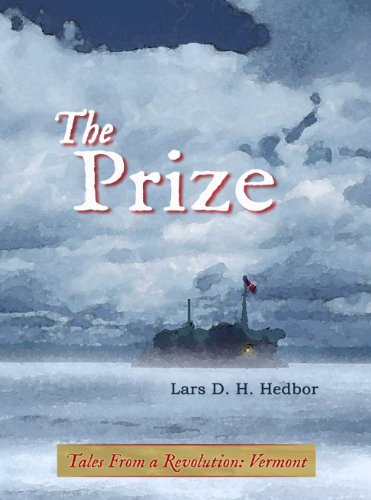 The Prize: Tales from a Revolution
Lars D. H. Hedbor
Caleb's father is serving with Ethan Allen's Green Mountain Boys as the long-anticipated open war against the British rages up and down the length of Lake Champlain. Between his duties on the family farm and constant worry about his father's safety, the young man's attentions are already fully occupied when a fateful encounter with an unlikely neighbor changes everything. Pulled into new intrigues and new friendships, Caleb finds himself on a path that changes his life - and which will affect the outcome of the whole war.
3 Votes

Tweet
The Prize: Tales from a Revolution review by Zane3

The Prize: Tales from a Revolution is a fictional novel written about a young man named Caleb, who lives in the years near the beginning of the American Revolution. Caleb’s father has been enlisted into the local militia, and it is up to Caleb and his younger brother Samuel to take care of the family farm for their mother. Caleb longs for his father, and wonders if the distant fighting will ever cease, allowing his father to return. However, the fighting between the colonists and the redcoats becomes less than distant.

What's this?
The Prize: Tales from a Revolution review by LGen080812

You've probably heard of the famous spy Nathan Hale, but have you ever heard of Sophia Calderwood? When Sophia witnesses the execution of Hale, she finds herself horrified by it. So horrified, in fact, that she makes a pledge to help the American cause in the Revolution. Soon Sophia becomes a spy and discovers a plot involving a traitor in the American army. Will she succeed in thwarting the plot, or will she end up being executed herself?

What's this?
The Prize: Tales from a Revolution review by BG

The Prize, takes place in 1777 in Vermont, on the banks of the Champlain River. This historical fiction is depicted in the eyes of a young man, as both he and his family live on the banks of the river near a small settlement. News of the war and ships seen out on the river, happen throughout the book. Battles won or lost by the British find their way to the small settlement’s tavern. Historical events as well as the mood of the men in the settlement are portrayed as they drink and talk together.