Prince Lazaro and the Magic Scales 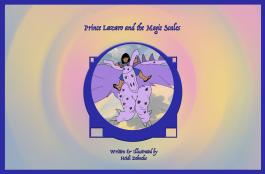 Prince Lazaro and the Magic Scales is a tale of adventure and timeless friendship. Journey with lonely Prince Lazaro as he rescues and becomes friends with Deluthian the dragon. The duo manage to keep one-step ahead of Deluthian's captors as they adventure together. The dragon enlightens Lazaro about the importance of gratitude, love, selflessness, and how precious our time together really is. A bit less lonely now, the prince and Deluthian race against time as they lure the villains into their trap.

Tweet
Prince Lazaro and the Magic Scales review by sylvie55555

sylvie55555
Every day seems the same for Prince Lazaro.  Everyone else in the kingdom has a task to do, so he is always left alone. One day, he decides to wander into the woods despite his parents' warnings to never go in alone. After walking awhile, he hits his head on a tree, and then gets transported into a different world! There, he meets a beautiful dragon whose scales hold the power of gratitude and happiness. Two evil men are trying to steal the scales.  Can Prince Lazaro save the dragon and bring happiness back to his kingdom?
Rating:
5

What's this?
Prince Lazaro and the Magic Scales review by glitterunicorn9

This book tells the story of a Prince named Lazaro and a dragon named Deluthian. Prince Lazaro had a boring life.  Every day he was just sitting on his throne as his parents worked to make their kingdom a better place. One day, he went for a walk in the forest despite being told to never go in alone. He follows a rabbit and fox deep into the forest. There, he gets transported into another world and finds a chained-down dragon whose name is Deluthian. He helps the dragon escape and finds out that the dragon is being chased by evil men for his magical scales.