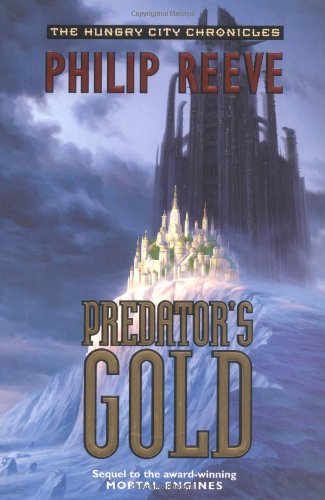 After their airship is attacked by the Green Storm, Tom and Hester find themselves in the icy city of Anchorage and now have to fight their way out of the plaque-infested city filled with thieves and savages before the Huntsman of Arkangel makes his next appearance in this dramatic sequel to Mortal Engines.
2 Votes

In the future, Hester and Tom own an airship, the Jenny Haniver. Hester and Tom's relationship is different then others, they claim to be boyfriend and girlfriend, but they are very different. Hester has a disfigured face and a soldier's toughness, while Tom is a handsome historian who thinks everything must be fair and just. They live in a world where cities move and bigger cities eat littler cities and enslave all of their citizens. Their airship, the Jenny Haniver used to be a famous commander's in the Anti-Traction League before she died in battle.

The book is set in the future, where America is a ruin and cities on wheels prowl the northern ice caps, the smaller ones look for trash as food, and the larger ones look for smaller cities as food. The protagonists, Hester and Tom, are not officially married. They are aviators of an airship. During one of their voyages they pick up Professor Nimrod Pennyroyal, a famous historian/novelist. On that same voyage, a mysterious group called Green Storm attacks the trio. Hester, Tom, and Professor Pennyroyal manage to survive, but their ship is going to crash.