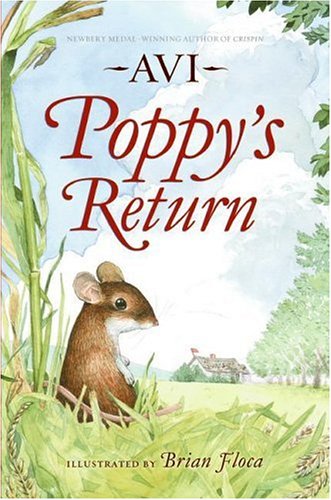 Poppy's Return
Brian Floca, Avi
Poppy returns ... with big trouble. Family trouble. Poppy and Rye don't know what to do about their son Ragweed Junior's attitude. He is rude, he is crude, and he has dyed his fur to look like Mephitis, his skunk friend. In short, Ragweed Junior is very much a teenager. Even Ereth, the cantankerous porcupine, with his salty swearing, can't straighten him out. Then Poppy gets an urgent request to return to her old home, Gray House, where her aging parents, Sweet Cicely and Lungwort, are in difficulties. Not only does she agree to go back, she decides to take Junior, in hopes traveling together will bring them together. But when Junior's skunk pal and Ereth join the party, the trip doesn't quite go as expected. And when Poppy recalls she did not get along with her parents, things become even more complicated. Poppy's Return is a hilarious adventure tale about family: the gleeful joys, the farcical sorrows, the high emotions, and the low comedy of living with and without relations. It's also about bears, bulldozers, and the boisterous antics of young mice doing the stinky red. And sugared slug soup, there's always Ereth to stir the stew of Poppy’s rich and rewarding life.
1 Vote

When Poppy's sister, Lily, unexpectedly arrives in Dimwood Forest with bad news that her family's and friends' home will be destroyed, Poppy decides to go back to her old home and try to save Gray House. How will she manage taking along her bratty teenage son, Ragweed Jr. (a mouse) and his best friend, Mephitis. When Poppy returns to Gray House, will she accept her father's plans for her, and will she be able to stop the bulldozer from wrecking the house? If not, what will happen to all the mice that live there?