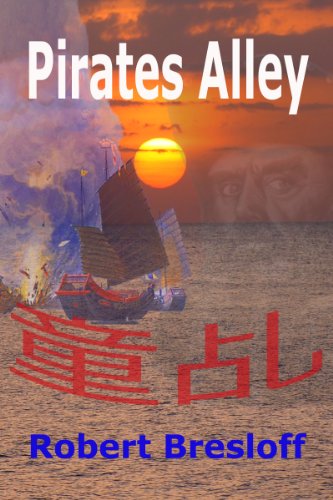 Pirates Alley
Robert Bresloff
An adventure story of Chinese pirates, magicians, ghosts and treasure ships.Chen grew up in Annam, but it was soldiers of the Chinese Emperor of the Dragon Throne who laid waste to his village and tortured and killed everyone. Chen, just twelve years old, escaped with the help of a mysterious old man. After many days march with the old man, he finds himself on a Chinese Treasure Ship, and it is then that the real adventure begins.But the old man has already revealed that he is a magician, and there is something very strange about Chen that the boy had never known and could not have possibly imagined. His skills may be unique, and without him the Chinese ships might not survive the pirates or come close to completing their mission halfway round the world…Then, hundreds of years later, another boy finds an ancient knife on a beach after days of searching because, somehow, he knew it was there. As if that was not enough, he and his friends are then plunged into a modern-day adventure of pirates, thieves, ghosts, and buried treasure. Recommended for readers aged 12 to adult.
1 Vote

This enthusiastic/adventurous story is about a boy named Chen who lives in a small chinese village. His mother and father got killed by the soldiers in China. Now Chen is off with Master Waan who has sworn to protect the boy at all costs. Once Chen finds out he can read minds, Master Waan quickly teaches Chen to become a young wizard! It also turns out that Master Waan is a wizard too! So Chen and Master Waan quickly come aboard a treasure ship, which is just the beginning of their adventure.