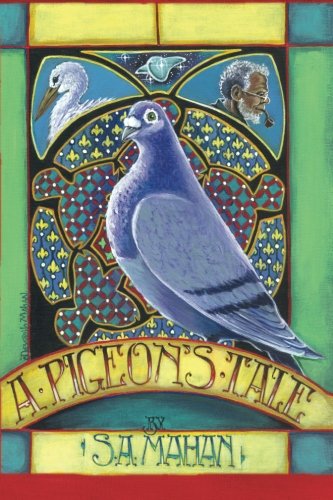 A Pigeon's Tale
S.A. Mahan
A Blue Ink Starred Review Best Book of 2016.  Walter is a pigeon living with his parents in a rancher's coop when a deranged wildcat attacks and sends them scrambling for their lives. Barely escaping with his life, Walter finds himself in a city where kindly street pigeons teach him about language, philosophy, and politics.A venture south to find a human family for the winter sees him face more desperate peril as a flock of snow geese help him finish the journey. Finding solace in a dorm room with two young college students, Walter heads home with one of them to a ranch in Texas where he is adopted by the close-knit family and their quirky pets.Walter forms a quick bond with the scientist grandfather who spends every day with Walter, working on a project in a mysterious tiny shack behind the house. This secret work soon becomes the center of Walter's life--and his fate--when he is thrust into an epic struggle for survival against cosmic forces that threaten to destroy the world.For fans of Watership Down and The Secret of NIMH, A Pigeon's Tale is a mind-bending sci-fi adventure tale about friendship, loyalty, and destiny.
1 Vote

Walter, a pigeon, finds out he is from a line of very famous and brave pigeons. He goes on a series of adventures and eventually meets up with an incredibly intelligent scientist named Grandpa. This meeting was his destiny. Grandpa and Walter work together on a century's long plan to save the world!