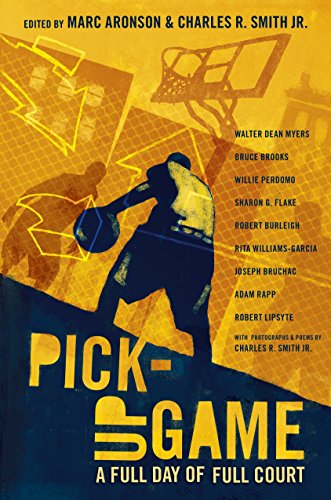 Pick-Up Game
Charles R. Smith Jr., Charles R. Smith Jr., Marc Aronson, Various
Pass! Shoot! Swish! And 1! An all-star team of YA authors scores spectacularly with an action-packed anthology about street basketball.It’s one steamy July day at the West 4th Street Court in NYC, otherwise known as The Cage. Hotshot ESPN is wooing the scouts, Boo is struggling to guard the weird new guy named Waco, a Spike Lee wannabe has video rolling, and virgin Irene is sizing up six-foot-eightand-a-half-inch Chester. Nine of YA literature’s top writers, including Walter Dean Myers, Rita Williams-Garcia, Adam Rapp, Joseph Bruchac, and Sharon Flake reveal how it all goes down in a searing collection of short stories, in which each one picks up where the previous one ends. Characters weave in and out of narratives, perspectives change, and emotions play out for a fluid and fast-paced ode to the game. Crackling with humor, grit, and streetball philosophy, and featuring poems and photographs by Charles R. Smith Jr., this anthology is a slam dunk.
1 Vote

Pick-Up Game is an amazing book about a day on the West 4th street courts, also known as The Cage. We see this day through the eyes of many. Through the eyes of the ballers, the show-boaters and shot-callers, the intellectuals, and players that just love the game. We get their stories and inner emotions, how the feel and what they do about it. But its not just about the inside of The Cage, but the spectators who enjoy every minute of their gladiator slamming the killing blow into the net, latching his elbow onto the rim as he honey-dips the ball.