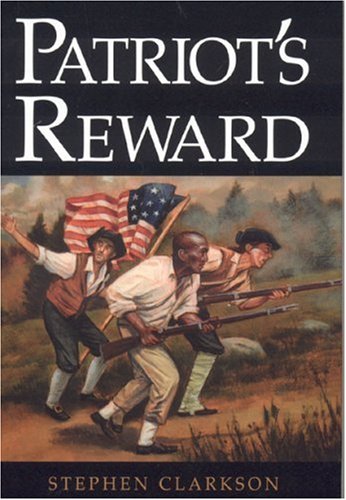 Patriot's Reward
Stephen Clarkson
Patriot's Reward is a fictional tale about a real-life slave owned by the author's ancestor in Portsmouth, New Hampshire during the American Revolution. His struggle to be free leads him to heroism in battles at Quebec, Lake Champlain, Bennington and Saratoga, and finally to a petition to the NH Legislature for his freedom. Clarkson's extensive research adds depth to this fast paced story.
2 Votes

Patriot's Reward by Stephen Clarkson is about an African American that has come to Portsmouth, Massachusetts on a slave trading boat called the Exeter. Bought by James Clarkson, James needed his help at the tanyard. James renamed his slave Will Clarkson. Soon Will learned how to read and write in English. After that he joined the Negro court. Then he got married to one of the slaves that came in on the same boat. Her name was Abi. As the conflict of the Revolutionary War began, Will wanted to join the American Army as part of a plan to win his freedom.

Patriot's Reward is the story of an African man captured by slave traders in 1755 when he was sixteen and brought from what is now Senegal, Africa to America to be sold off as a Slave. At the beginning of the novel main character Will Clarkson, having adopted the surname of his owners, undergoes many emotional, physical and circumstantial changes, thus allowing him to develop into an interesting and appealing character central to the plot. Will develops a yearning to learn the English language, like the white men he is surrounded by.