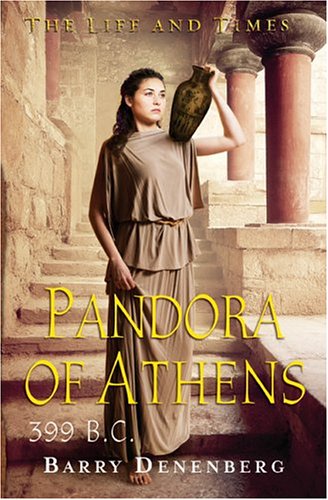 Pandora of Athens
Barry Denenburg
In this departure from our first person diaries, we leap into ancient times in a third person novel filled with action, adventure, and glory -- all the drama of life in ancient Greece.Ancient Greece is brought brilliantly to life by renowned author Barry Denenberg.Pandora is trapped in the roles laid out for Greek women by her narrow-minded father. Much to her despair,she is engaged to marry a man more than twice her age, so that Pandora waits with dread for her fourteenth birthday, when she'll be old enough to marry. But one day, when Pandora goes to fetch water, she meets the Wise One, who is also called Socrates, and what he tells her changes her life. During his famed trial, Pandora finds herself caught up in the intrigue and turbulent politics of ancient Athens.
1 Vote

Pandora, a 13 year old girl, feels trapped in the life of a young greek girl. Her father has committed her to be engaged to a man more than twice her age when she turns 14. One day she meets the Socrates, the Wise One of Greek philosophy. The Wise One tells her about her name Pandora. He tells how Zeus punished men with women and Pandora was the first women's name. Inn history, Pandora opened a forbidden box and after that there was all kinds of chaos and trouble. The Wise One gets interrupted before the end of the story and tells her to return next week.