Outlaw: The Legend of Robin Hood 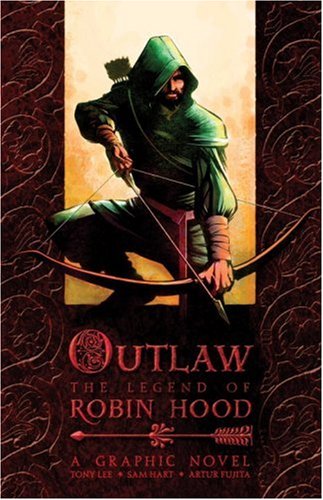 Outlaw: The Legend of Robin Hood
Artur Fujita, Sam Hart, Tony Lee
Fast-paced graphic storytelling and stunning full-color illustrations combine in an action-packed retelling of the heroic Robin Hood story.How did Robin of Loxley become Robin Hood? Why did he choose to fight injustice instead of robbing for his own gain? Expressive and gritty, this graphic novel whisks readers back to Crusades-era England, where the Sheriff of Nottingham rules with an iron fist, and in the haunted heart of Sherwood Forest, a defiant rogue — with the help of his men and the lovely Maid Marian — disguises himself to become an outlaw. Lively language and illustrations follow the legendary hero as he champions the poor and provokes a high-stakes vendetta in a gripping adventure sure to draw a new generation of readers.
1 Vote

Tweet
Outlaw: The Legend of Robin Hood review by ECra

This book is a graphic novel that tells a version of the story of Robin Hood. The story is in the genres of adventure and legend. The story begins in 1180 when Robin of Loxley is still a young boy and the son of a nobleman. His father's inability to save his former comrade leads Robin to vow to become a skilled archer so that he can protect others. The story then jumps to 1192, when Robin is fighting in the Crusades. He receives word of his father's death and returns home to avenge him. He finds his lands and people being exploited.