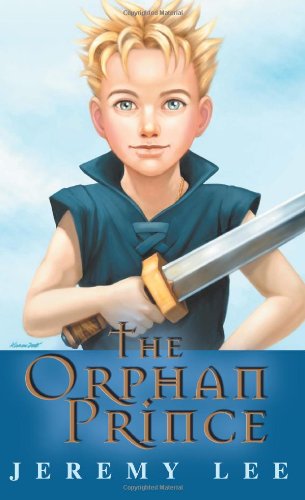 The Orphan Prince
Jeremy Lee
The silhouette of a man on horseback stood on the knoll against the brilliant backdrop of the lightning, a man with flowing long hair and a large cape that flapped wildly in the wind. Apparently, King Idan had also seen the horse rider, for he pulled on the reins and halted the horse's advance. Leaning back against his father, Ari remained still and peered ahead into the gloom, his heart beating with apprehension.At the age of six, Prince Ari witnessed his father's assassination. Five years later, he continues to have recurring nightmares about the tragedy.Although he's still heir to the throne of the Kingdom of Dinan, Ari's life since King Idan's death has been full of loneliness and misery. His uncle, Lord Peran, harbors no love for him, and his cousin, Roi, hates him.Ari blames his misery on his father's assassin, Black Wolf, a legendary swordsman from the Empire of Narsus whose faceless, shadowy figure haunts Ari's dreams. But Black Wolf's name inspires great fear and deep fascination in Ari.A few days after his eleventh birthday, Ari embarks on a perilous journey to Narsus in search of Black Wolf. What he finds at the end of the journey changes his life forever.
1 Vote

Prince Ari witnessed something no child should ever see: his father's death. The king was killed by an assassin known only as the Black Wolf when Ari was only six; the boy was left physically unharmed but emotionally scarred. Now eleven years old, still haunted by dreams of that faithful night, Ari is about to come face-to-face with the Black Wolf again. With the circumstances of his home life and his royal status changed, one might think that Ari would seize this opportunity for revenge, but he surprises everyone with his fascination for and trust in the Black Wolf.