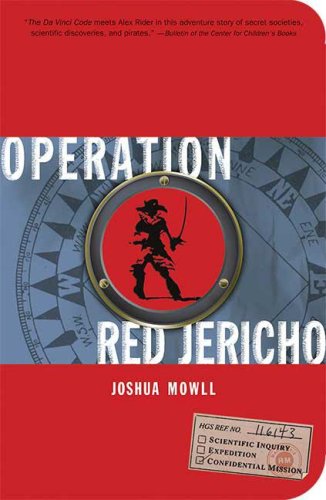 Operation Red Jericho
Benjamin Mowll, Julek Heller, Niroot Puttapipat, Joshua Mowll
"THE DA VINCI CODE meets Alex Rider in this adventure story of secret societies, scientific discoveries, and Chinese pirates." — BULLETIN OF THE CENTER FOR CHILDREN'S BOOKSTwo teens, a shadowy mission, and no turning back. . . . This lavish 1920s journal kicks off a three-part series recounting the adventures of two intrepid siblings tracking their parents’ disappearance. Starting aboard their uncle’s research ship, the saga moves at a breathless pace through the streets of Shanghai and on to a terrifying island fortress. Chinese mercenaries, a hateful pirate warlord, and a highminded secret society all play a part in a thrilling tale of intrigue packed with nonstop action and novelty features.A New York Public Library Book for the Teen AgeAn Oppenheim Toy Portfolio Gold Award Winner
1 Vote

Doug and Becca MacKenzie, two teenage orphans, are forced to live with their uncle after their parents mysteriously disappear. Their uncle, Fitzroy MacKenzie, is the sea captain of a research ship named Expedient. Doug and Becca over hear Fitzroy talk to an unusual passenger, and decide to do some snooping about. As they learn, Expedient is not a research ship at all. It is a World War II Q ship. As a Q ship, the Expedient is disguised as a defenseless cargo ship, but once an enemy ship comes within firing range, cleverly hidden guns rise above the deck and open fire.