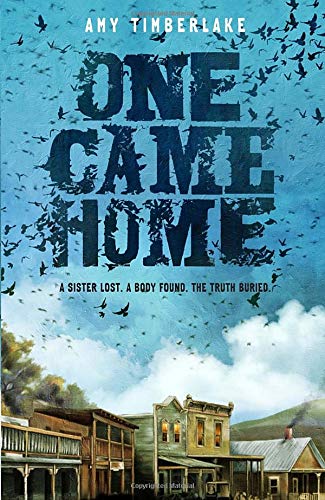 One Came Home
Amy Timberlake
A Newbery Honor BookAn ALA-ALSC Notable Children's BookWinner of the Edgar Allan Poe Award for Best Juvenile Novel “An adventure, a mystery, and a love song to the natural world. . . . Run out and read it. Right now.”—Newbery Medalist Karen CushmanIn the town of Placid, Wisconsin, in 1871, Georgie Burkhardt is known for two things: her uncanny aim with a rifle and her habit of speaking her mind plainly.But when Georgie blurts out something she shouldn't, her older sister Agatha flees, running off with a pack of "pigeoners" trailing the passenger pigeon migration. And when the sheriff returns to town with an unidentifiable body—wearing Agatha's blue-green ball gown—everyone assumes the worst. Except Georgie. Refusing to believe the facts that are laid down (and coffined) before her, Georgie sets out on a journey to find her sister. She will track every last clue and shred of evidence to bring Agatha home. Yet even with resolute determination and her trusty Springfield single-shot, Georgie is not prepared for what she faces on the western frontier.
1 Vote

I read the book One Came Home by Amy Timberlake.   The main character is a girl named Georgina.  One day after her older sister runs away with the pigeoners, the  Sherriff  thinks he found her body along the side of the road.  She had been there for awhile so the body was not recognizable but the dead girl was wearing a dress their mom had made.  Georgina does not think it is her sister and runs away to find her sister and prove she is not dead.  Most of the book is about her travels to find her sister.  When Georgina's grandfather hears of h