Nokosee: Rise of the New Seminole 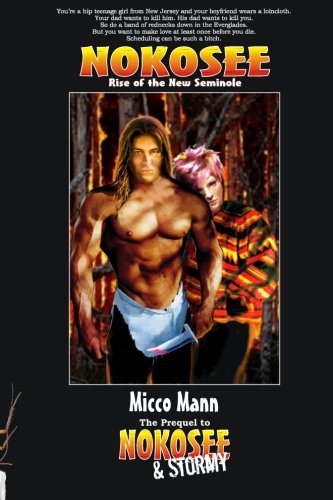 Nokosee: Rise of the New Seminole
Micco Mann
Cultures clash, sparks fly, love blooms, people die, and two kids, one a little bit punk and the other way too country, see their lives changed forever. Stormy Jones has to spend summers with her father, an Everglades park ranger. Thinking it might build character, he drags her along to fight an Everglades fire and promptly loses her when it gets out of control. Stormy is helpless in the Natural World until Nokosee stumbles upon her. Raised deep in the Everglades, Nokosee has never seen a white person before, much less one with "sky eyes and flamingo hair." Built like a bronze Adonis, 17-year-old Nokosee and Stormy begin a series of amazing adventures as a modern day "Tarzan and Jane" and it's only a matter of time before they fall into a libido fueled mixed-up kinda love. Too bad for them. Nokosee's father is certifiably deranged. Nokosee is the first of the "New Seminole" whom he is grooming to take back the "Outside." The last thing he wants is for his son to fall for an "Outsider." You can learn more at: http://www.newseminole.com
1 Vote

Tweet
Nokosee: Rise of the New Seminole review by GSch

Stormy Jones hates the Everglades, which, unfortunately for her, is where she is forced to spend her summers with her divorced father. This particular summer, her dad decides to take her on a fire-fighting expedition in the forest, and immediately loses track of her. Stormy, a regular city girl, is left to fend for herself, until she meets Nokosee. Nokosee, a native of the Everglades, takes her on several adventures on the way back to the "Outside", as he calls civilization.