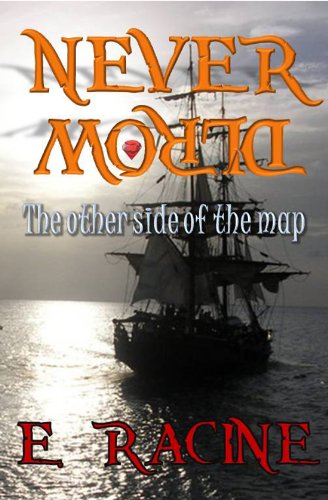 Neverworld
E. Racine
Sixteen-year-old Samantha Beckett and her friend, Charley Neilson, are walking home from school when they find themselves being chased by two strange looking boys in a white van. Racing through backyards and under hedges, they finally shake their pursuers, only to run into Captain Bartholomew Jones, a man who claims he was sent to deliver Samantha to her mother, the woman who abandoned Samantha at birth. Obsessed with the idea of finding her mother, Samantha agrees to go along with Jones, so long as Charley can accompany them. Trudging through the woods near her home, Jones leads them into a ring of mushrooms and thrusts a silver spoon into the ground. When the bright lights fade, Samantha finds herself in a land unlike any she has ever known, a harsh world of swordfights and sailing ships, a world without electricity or running water and filled with people who seem intent on killing her. To find her mother and discover the reason for her abandonment, she and Charley will have to escape kidnappers, race typhoons and battle monsters. As they both soon learn, only the quick and the strong survive long on the other side of the map, in a place called Neverworld.
1 Vote

When an orphaned girl named Samantha gets an opportunity to meet her mom, she takes it. She goes with two men and a giant she doesn't know to another world to meet the person who abandoned her on a doorstep, but it is a much bigger adventure than she expected. She has to fight vampires, werewolves, and she discovers something special and amazing about herself and her mother.